Menu
Back to Resources

U.S. electric vehicle (EV) sales are off to a slow start in 2019. This reflects Tesla’s competitive pressures and the market’s comparatively lower sales following record-shattering year-end volumes. Automakers sold over 100,000 EVs through the first five months of 2019, an 8.4 percent decrease from the same period last year, and a 51 percent decrease compared to the final five months of 2018. 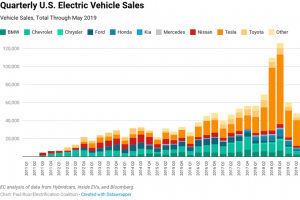 For total sales, October, November, and December historically have been the best months for EVs sales in the United States. Sales were especially robust at the end of last year when Tesla, which accounted for nearly all the growth in the battery electric vehicle (BEV) market through the first five months of the year, hit the 200,000-vehicle federal tax credit cap in December. Sales have since fallen year-on-year (y/y) as the tax credit for Tesla vehicles halved and entered a phase-out period.

Tesla’s financial predicament underscores the early-stage nature of EV technology; automakers need to continue investing in research and development activities to lower production costs and increase range. One way automakers have met consumer demand is through larger and more spacious sport utility vehicle (SUVs). These vehicles are helping to increase BEVs’ share of the overall plug-in vehicle market. BEVs nevertheless remain an early-stage technology that requires ongoing private and public support to drive adoption through this critical phase of deployment.

Although EV sales y/y slowed at the start the year, the overall market is expected to grow robustly in the coming years, especially as automakers redouble their electrification commitments and introduce new vehicle models that increase the number of consumer options. In late 2018, General Motors (GM) promised to double its investment in EVs and autonomous vehicles, planning for its Cruise Automation division to launch a fleet of self-driving shuttles based on the Chevy Bolt this year. For electrification, GM says Cadillac will become the company’s “lead EV brand,” helping it accomplish its stated goal of selling at least 20 EV models globally by 2023.

Through the first five months of 2019, other automakers have introduced three larger and more spacious EV models: the Audi e-tron, the Kia Niro EV, and the Subaru Crosstrek Hybrid. In line with growing consumer demand for SUVs and pick-up trucks, the new Audi e-tron is designed to look like a conventional SUV while offering a 240-mile range. Similarly, Kia’s $38,000 manufacturer’s suggested retail price Niro EV crossover has been called “the new normal electric family car.” Automakers are now selling 15 BEV models and 20 plug-in hybrid electric vehicle (PHEV) models in the United States.

In total, U.S. automakers sold more than 76,700 BEVs and nearly 32,900 PHEVs in the first five months of the year, up 47 percent y/y in the BEV segment, but down 30 percent y/y among PHEVs. The month of May continued a period of declining PHEV sales as consumers and automakers decisively shift toward BEV offerings. In November 2018, GM said it would eliminate the Volt from its lineup in favor of the all-electric Bolt. Consequently, BEVs now account for nearly seven out of every 10 new plug-in vehicles sold today, a share that has increased more than 17.5 percent from last year.

Although the auto industry has sold more than 1.25 million EVs in the United States since 2011, the market has yet to achieve the production capacities and economies of scale needed to sufficiently reduce the initial purchase price of EVs, or upfront cost.

EV cost parity with internal combustion engine vehicles (ICEVs) is still five to six years away – 2024 for 150-mile battery electric vehicles, and 2025 for BEV crossovers and sports utility vehicles. And while the average cost of battery pack components continues to decline as a proportion of the total vehicle price, lithium-ion batteries nevertheless account for a substantial share of the total retail price. In 2018, the battery-cost represented more than one-third of the average mid-size EV cost. A Morning Consult poll in May found that 60 percent of U.S. adults rate high up-front costs as a factor that makes them less inclined to purchase an EV. Notably, EVs, as measured by the total cost of ownership, provide a better value compared to ICEVs over the long-term. However, several states have enacted measures that erode some of the economic value proposition of EVs.

Incentives that help lower the purchase price of EVs remain critical at this phase of technological development. Tesla is not alone in needing a boost; GM has also reached its cap, in part because of the popularity of its Chevy Bolt BEV. In April, a bipartisan group of Senate lawmakers introduced legislation that would triple the number of EVs eligible for federal tax credits worth $7,500. Under the proposed legislation, automakers would be eligible to receive the full $7,500 tax credit on the first 600,000 EVs sold—a monetary incentive that is passed on to consumers through year-end taxes.

Incentives like these can increase the penetration of EVs within the light-duty vehicle market—but with a cap of 200,000 vehicles, there are constraints. In H2 2019, expect to see the continued shift to bigger cars. Contemporaneously, automakers will continue to roll out EV versions of SUVs. Whether or not consumer demand can match 2018 highs, however, is to be seen. The market will have a better sense next fall.