Menu
Back to News & Events

Charging Up Illinois’ Trucks and Buses 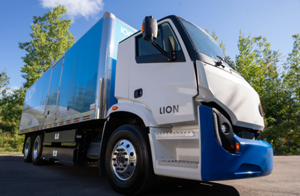 Widespread deployment and adoption of electric trucks and buses in Illinois will result in substantial benefits for the economy, public health, energy security, and the climate.

Multiple vehicle manufacturers have recently committed to full electrification of their product lines, and the federal government has renewed its focus on electrifying transportation. State policy action is needed to leverage this momentum for Illinois. We have a finite window of opportunity to preserve U.S. leadership in the auto industry, meaningfully reduce emissions, and protect American manufacturing jobs. Electrifying trucks and buses is a critical step forward for Illinois.

Add your name below, telling our state leaders: Illinoisans demand action to ensure that our trucks and buses go electric.

For the state of Illinois, transportation electrification will generate renewed investments, job growth, and continued competitiveness in the global automotive market.

Robust public investment and regulatory reform along the EV supply chain has the potential to create more than 500,000 jobs across the United States over a five-year period, according to a report by the Electrification Coalition and Securing America’s Future Energy. Nearly 154,000 of those jobs would stem from incentives that make it less expensive to buy medium- and heavy-duty EVs like trucks and buses. And the United States stands to gain 29,000 jobs through measures to expand charging infrastructure and energy storage. These are jobs that can be part of Illinois’s future.

Auto manufacturers are already reimagining their vehicle portfolios, releasing new electric models, and investing in EV manufacturing, including in Illinois.

The United States is the world’s largest consumer of petroleum, accounting for one-fifth of global daily supply. And oil accounts for more than 90% of energy use in the U.S. transportation sector. Because the fate of the U.S. economy is so closely tied to petroleum, the United States is forced to expend tremendous resources to secure the world’s oil supply. The U.S. military to spends $81 billion per year to protect oil infrastructure and oil transit routes. In addition it the financial drain, this puts the lives of our servicemembers at risk to protect the flow of oil.

Electricity, on the other hand, is ubiquitous and domestically produced from a diversity of energy sources. Electricity is also cheaper than gasoline and diesel fuel, and its pricing is far less volatile. According to the U.S. Energy Information Administration, even though domestic oil production has increased substantially in recent years, the global oil market is still heavily influenced by OPEC, a cartel of 13 petroleum-exporting countries in the Middle East, Africa, and South America.

Vehicles are a leading source of air pollutants that affect human health. Vehicle emissions contribute to the formation of ground level ozone (smog), which can trigger health problems such as aggravated asthma, reduced lung capacity, and increased susceptibility to respiratory illnesses, including pneumonia and bronchitis. Motor vehicles, particularly those used for freight, are also a major source of fine particulate matter.

Particulate matter is linked to significant health problems, including asthma, chronic bronchitis, and heart attacks. Long-term exposure is likely to cause lung cancer. Low-income and minority communities are more likely to be located near highways and other transportation facilities that impact local air quality, and to suffer from negative health effects.

According to the American Lung Association, widespread adoption of electric vehicles by 2050 would result in an estimated $72 billion per year in health care savings nationally. In Illinois alone, the annual benefits would include avoidance of $3.2 billion in health-impact costs, 274 premature deaths, 4,106 asthma attacks, and 18,735 lost work days.

Transportation is the single largest source of GHG emissions in the United States. Life cycle GHG emissions of an EV are typically far lower than those of a comparable conventional vehicle. MHD vehicles, including delivery trucks, tractor-trailers, transit buses, and school buses, represent approximately 11% of the vehicles on the road, but they produce about 29% of the GHG emissions that come from vehicles. That’s why the electrification of these vehicles is so critical to addressing climate change.

Electrification of medium- and heavy-duty vehicles will also be essential to Illinois’s ability to meet its own climate goals. In 2019, Governor J. B. Pritzker signed Executive Order 2019-06 entering Illinois into the U.S. Climate Alliance, a group of states committed to reducing GHG emissions consistent with the United Nations Paris Agreement. Every Alliance member committed to implement policies that advance the goals of the Paris Agreement, aiming to reduce GHG emissions by at least 26-28% below 2005 levels by 2025.

Policies to Advance Electrification of Trucks and Buses

The Pritzker administration recently proposed ambitious plans for the remaining $88.6 million of the Volkswagen settlement funds to support all-electric public transportation and electric school buses. To build upon this promising step, Illinois should join the Multi-State Medium- and Heavy-Duty Zero Emission Vehicle Memorandum of Understanding, pledging that at least 30% of all new trucks and buses sold in Illinois will be zero-emission vehicles by 2030, and 100% by 2050. To meet these commitments, Illinois needs to take the following policy actions:

Let Governor Pritzker know that you support the effort to electrify Illinois trucks and buses. Email Neda Deylami to get involved.